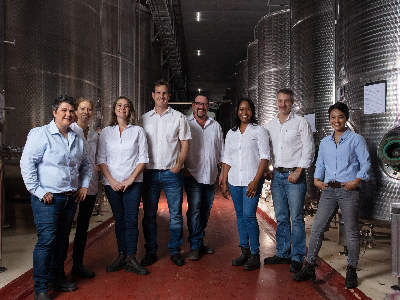 WHAT DOES THE ABBREVIATION KWV STAND FOR?

WHAT IS THE DIFFERENCE BETWEEN COGNAC AND BRANDY?

Cognac is a type of brandy made in a particular way, governed and guided by the Bureau National Interprofessionnel du
Cognac. Brandy, particularly South Af rican Brandy, is similar in that it also adheres to strict methods in production, as
determined by the Liquor Products Act. The other difference is the region. Just like Champagne can only be called as
such if made in the region and according to specific set standards, production of Cognac must be in the Cognac region of
France. Production of Brandy can, however, be in any other area or place. One similarity they both have is that both
Cognac and South Af rican Brandy must be made f rom grapes.

WHERE CAN I FIND KWV’S PRODUCTS?

WHERE DOES KWV SOURCE ITS GRAPES FROM?

KWV is a commercial producer with access to grapes f rom more than 50 farms scattered across the Western Cape’s Paarl, Stellenbosch, Swartland, Perdeberg, Malmesbury, Darling, Elgin, Robertson and Wellington regions. KWV’s ability to source the finest quality grapes for a premium expression of the Cape Winelands is close to unrivalled and contributes to our ability to make the highest quality wines.

WHO IS THE CHIEF WINEMAKER?

Justin Corrans is KWV’s Chief Winemaker. He brings with him 20 years of local and international experience.

WHO ARE THE WINEMAKERS?

We have an esteemed team of winemakers who work in our cellars. These are Izele van Blerk, Kobus van der Merwe, James Ochse, Carla Cutting, Sacha Muller.

WHO IS THE VITICULTURIST?

Marco Ventrella is our Chief Viticulturist. He joined KWV in 2010, and has a fascination with vineyards, winemaking and the challenges associated with making great wine.

WHAT IS THE DIFFERENCE BETWEEN NEW AND OLD WORLD WINES?

WHO IS THE BRANDY MASTER?

Pieter de Bod is our Master Distiller. He has over 25 years’ experience in the spirit business, and apart f rom making our award-winning brandies, Pieter also judges on many local and international tasting panels